Home > Trucks > Who Will Build 651 Parachuting Trucks For The Army?

Who Will Build 651 Parachuting Trucks For The Army?

Three very different teams are vying to build the Army’s Infantry Squad Vehicle, a truck tough enough to parachute out of an airplane and then drive away cross-country with nine heavily armed infantrymen. By Nov. 13th, each team owes the Army two vehicles for testing, with the winner getting a contract for 651 ISVs next year. 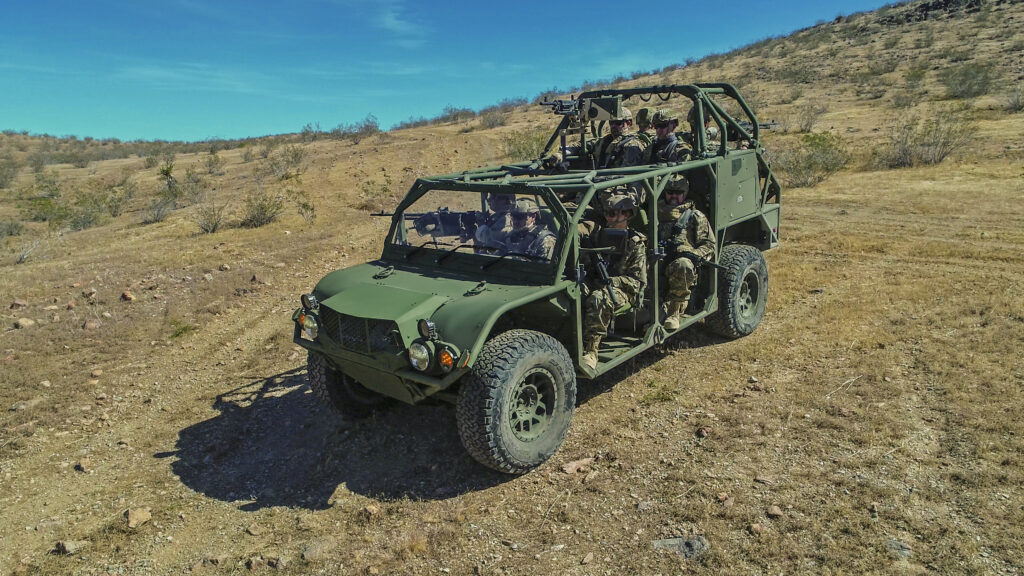 The Oshkosh-Flyer team is the closest thing to an incumbent in the competition. The Army had earlier picked the Flyer-72 as an interim air-droppable transport, the A-GMV, and Flyer is offering an upgraded version for the follow-on program, ISV. Actual mass production will be done by Oshkosh, which makes a host of Army trucks — most prominently, the beefed-up successor to the Humvee, the Joint Light Tactical Vehicle (JLTV), which the Army and Marine Corps plan to buy over 50,000 of in the coming decades.

What’s more, Oshkosh plans to build the 5,000-pound ISV on the same assembly line as all its other vehicles, from the 14,000-lb JLTV to 10-ton FMTV dump trucks. (The earlier version of the Flyer-72 was mass-produced by General Dynamics). The ISV will be the lightest vehicle on the Oshkosh line, VP George Mansfield told me, but the company is confident it can build the air-droppable trucks more affordably than Flyer could — and at least as well. In fact, Mansfield said, he expects the Oshkosh-built version to be more reliable. That’s in part because of Oshkosh’s manufacturing expertise — it won the JLTV contract in large part because its offering broke down less than half as often as uparmored Humvees — and in part because of Flyer’s extensive field experience with the earlier versions built for the Army and Special Operation Command. 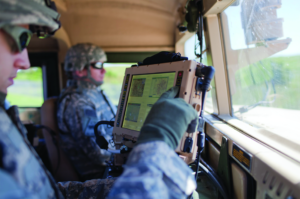 The timeline of Leonardo DRS’s 50 years of innovation is peppered with notable technologies and capabilities that have given militaries around the world a warfighting edge. Here’s a look.

Polaris and SAIC both have plenty of defense experience. Polaris’s DAGOR did lose the earlier A-GMV contest to Flyer, but numerous DAGOR variants are in widespread service with Special Operations Command, the 82nd Airborne Division (shown in the video above), Canada, and other foreign customers the company can’t disclose.

“The DAGOR is already certified” — by the Army itself — “for all of the transport requirements that the Army is looking for, whether that’s internal air transport, sling-load transport, or air-drop,” Polaris VP Jed Leonard told me. And each of those prior customers required tweaks to the platform or special mission equipment — heavy weapons, sensors, radios — that the DAGOR could easily accommodate.

Integrating such high-tech kit is SAIC’s core competency. While not a manufacturer itself, SAIC has done decades of integration work for the military, most extensively on the MRAP program, fitting other companies’ vehicles with the sophisticated electronics that turn a truck into a weapons system. It also provides extensive maintenance and other support worldwide.

The two companies have worked together on and off, on small projects, for years, as various customers bought Polaris vehicles and then asked SAIC to equip them for specific military missions. But the current partnership is a big step up for both.

The odd man out is GM Defense, which giant General Motors created — in a sense, re-created — not quite two years ago after selling off most of its defense programs back in 2003. GM Defense president David Albritton just came aboard a year ago and has spent much of his time working with “Mother GM” on potential joint projects and spin-offs, from self-driving car technology to hydrogen fuel cells, he told me in an interview. “I’m not reporting any revenues at this point,” he said, although GM Defense does already have some contracts he can’t disclose.

GM’s offering is the only contender without a prior track record in the military. But their ISV is derived from the Chevrolet Colorado, of which US customers have bought more than 100,000 a year of since 2016, giving GM staggering efficiencies of scale no competitor can match. Specifically, the GM ISV a beefed-up, militarized version of the Colorado’s offroad racing variant, the ZR2, with which it shares 70 percent of the same parts — parts that are available from Chevy dealers worldwide. GM builds over 10,000 ZR2s a year: a rounding error for General Motors but a megaprogram for the Army.

GM’s scale advantage is not just in production and parts. It’s also in engineering. The company spends over $7 billion a year on R&D, Albritton told me, and its ISV offering includes advanced suspension systems like jounce shocks and dynamic spooling. GM’s challenge is overcoming its inexperience in the defense sector — especially, proving it can integrate military electronics onto its civilian-derived vehicle.

Overall, ISV is an especially interesting competition because none of the contenders is a classic defense prime:

Compare and contrast the Army’s Optionally Manned Fighting Vehicle program, which is de facto down to a single competitor — defense industry stalwart General Dynamics (which bought GM’s previous defense business back in 2003). ISV shows the kind of variety that the Army wants to encourage and needs to infuse innovation and competition into its programs.

Yes, at 651 trucks — at least, in the initial 2020 contract — this is a modest program in both size and technological ambition. It’s easily overshadowed by the hypersonic missiles, high-speed aircraft, and robotic tanks of the Army’s Big Six priorities. By contrast, for the predecessor competition (the one Flyer won) back in 2015, we ran eight stories in three months because there was so little else the cash-strapped and acquisition challenged Army was buying at the time.

But the Infantry Squad Vehicle is still an important piece of the larger Army puzzle. The Army’s infantry brigades — especially its 82nd Airborne parachutists — are its most strategically deployable units, easily packed into aircraft and flown around the world overnight, while heavy armored forces cram two tanks into one C-17 or, more often, go by ship. But once the infantry arrives, it moves on foot. (Although we bet everyone in the 82nd remembers being called a “speed bump” in this Defense Science Board study.)

The idea of ISV is a troop transport light enough to be air-dropped or, more often, delivered by helicopter. That way, the troops can land a long distance from their target — specifically, far enough their transport planes or helicopters aren’t shot down by anti-aircraft missiles — and then advance quickly overnight before attacking on foot at dawn.

We expect to see all three competing vehicles on the show floor at the Association of the US Army megaconference next week.

Buying A Used Car? 7 Automatic Transmission Problems To Look Out For

We Meet The Female Truck Driver Gaining Popularity in Japan

This blog brings you car tips; expert ideas of vehicles and pictures.

We Meet The Female Truck Driver Gaining Popularity in Japan